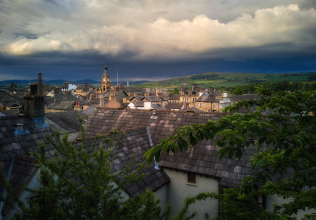 For many people, the market town of Kendal in Cumbria is the gateway to the Lake District National Park.

But for those in the know, it’s actually the perfect place to base yourself if you want access to both the Lake District itself and the less populated South Lakes.

Because it’s Kendal’s proximity to areas like the Trough of Bowland; coastal locations such as Grange-Over-Sands and the Silverdale and Arnside AONB as well as the Yorkshire Dales that make it a fantastic hub for exploring some of the north of England’s most picturesque scenery.

A former wool town, Kendal is a small market town in the south of Cumbria, just a mile from the edge of the Lake District National Park.

Perhaps most famous for its Kendal Mint Cake, Kendal is just 9 miles from Windermere (and about 30 miles from Keswick).

But unlike Windermere and Bowness, it’s typically less packed to the gunnels in the summer with visitors, cars and caravans, making it a much less stressful location to base yourself should you wish to come and explore the Lakes.

How do I get to Kendal?

Kendal is easily located just six miles off the M6 motorway, at junction 36 and therefore easily accessible from anywhere in the UK.

Or if you fancy letting the train take the strain, you can get to Kendal on the West Coast Main Line (from London Euston to Glasgow) by alighting at nearby Oxenholme. Or taking the branch line into Kendal itself.

What kind of attractions are there near Kendal?

To be honest, you will be spoilt for choice when it comes to looking for things to do in the area.

Those with a dare devil leaning will enjoy the numerous outdoor pursuits in the local area, including mountain biking, hiking, caving and pot holing to name just a few.

There are also a multitude of water sports options in both the Lake District and South Lakes areas, including windsurfing, water skiing and sailing. Why not try Stand Up Paddleboarding (SUP) down the River Derwent, into Derwent Water?

And those who like a bit of retail therapy will enjoy Kendal’s many high street and independent shops.

Head out of Kendal to nearby Kirkby Lonsdale for a mooch around this stunning little town, with numerous coffee shops, eateries and even its own brewery.

Foodies may want to stop by Hipping Hall for dinner. Or drive over to Cartmel and sample the Michelin starred food at the restaurant L’Enclume.

What is there to do in Kendal for the kids?

Kids of all ages will be spoilt for choice in Kendal and the surrounding area too.

Head to the coast and explore the incredibly beautiful villages of Silverdale and Arnside – or take the train one stop, across the sands and over the viaduct to Grange.

If the weather is less favourable, there’s the Brewery Arts Centre for theatre and cinema as well as great food. There’s also a fantastic indoor climbing wall to let off some steam.

Have a browse through our of holiday cottages available to rent in Kendal below.

You can then narrow down what is available by using the filter options on the left until you find your favourite property.

If you have any questions about booking a Kendal holiday cottage please don’t hesitate to give us a shout – we love helping out with any queries about the cottages and offering you advice before you go ahead and book.

Or if you’d rather put your feet up and have a cuppa whilst we find the perfect place for you, then please contact our concierge service and tell us what you are looking for in your next holiday cottage.

We aim to get back to you with tailored suggestions within 24 hours of receiving your request.