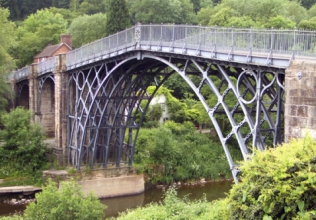 One of England’s most rural and least crowded counties, Shropshire was actually the birthplace of the Industrial Revolution.

Popular places to visit include the Tudor market town of Shrewsbury, whilst foodies can delight in the gastronomy central which is Ludlow!

Bridgnorth and Church Stretton are also well worth a visit as are The Severn Valley Railway and the Ironbridge Gorge area – itself a UNESCO World Heritage Site.