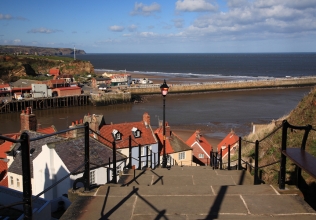 Situated on the east coast of Yorkshire, this seaside town, at the mouth of the River Esk, is noted for its swing bridge and grade II listed east and west piers as well as the impressive ruins of its 13th century Whitby Abbey.

Surrounded by the North York Moors National Park on one side and the North Sea on the other, Whitby’s coastline, commonly referred to as ‘Jurassic Coast’ or ‘Dinosaur Coast’ is a favourite with fossil hunters, with dinosaur footprints visible on the beach!

Whitby is also known for black mineraloid jet, found in the cliffs and on the moors and used to make jewellery, a favourite in Victorian times.

Historically a major whaling port and ship builder, Whitby’s economy now is now focussed on fishing and tourism.  With its cobbled streets, picturesque houses and fantastic fish and chips, it remains an extremely popular destination for those looking to escape to a seaside holiday cottage.

There’s plenty to do if you like bird watching, walking, fishing, sailing or cycling.  And whilst you’re here, why not visit the historic City of York, with its walled city and imposing York Minster?

Read our blog on reasons why you should visit Whitby.